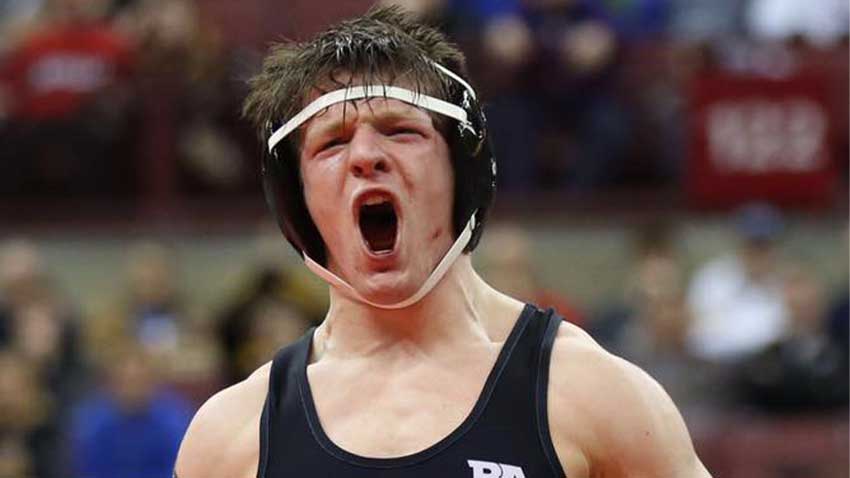 He had every intention of wrestling at the prestigious Midlands Championships in December and various other high-level tournaments. He planned on winning them, too.

A global pandemic altered his original plan, but the intent and the desire is still there. Gallagher doesn’t care who he faces, either. He wants the best domestic and international competition wherever and whenever he can find it.

“I’ve been training with the best guys for a while,” Gallagher said. “I’ll travel everywhere. I travel to the Ohio RTC and I always pick out the best guy and just get beat up ever since I was little.

“I grew up that way. Go pick out the toughest guy and see what you got. It’s kind of part of me.”

Gallagher’s list of accomplishments is long and distinguished. He is an Ohio state champion and was named Ohio’s Most Outstanding Wrestler in 2020. He also won Ironman last December and was a 2019 Fargo champion. Gallagher gets to add Cliff Keen Preseason Wrestler of the Year to that list after he was recently selected by Trackwrestling for the honor.

His most memorable accomplishment won’t be found in a stat line. Gallagher broke a bone in his back during the first week of his sophomore year and couldn’t walk for three weeks. Doctors said it would be nine months before he could wrestle and that his season was over.

Gallagher began physical therapy and went crazy with the prescribed movements. He said he “bulletproofed his back” with the exercises, outdoing doctor’s orders.

He started training two weeks before sectionals and, somehow, was in better shape than anyone in the room.

“I don’t know how,” Gallagher said. “Maybe I’m just tougher than them.”

Gallagher won every match by technical fall at sectionals, districts, and state until his final match against senior Connor Brady — one of the top wrestlers in the nation and currently a sophomore Virginia Tech. The two were locked in a back-and-forth battle until Gallagher pulled out a hard-fought 7-5 win.

St. Edward coach John Heffernan says the difference between Paddy Gallagher and everyone else is obvious. His desire to improve and to get better on a daily basis sets him apart.

“He’s always watching film. He’s always texting me about a match. He’s watching matches of guys who are better than him so he can find ways to get better. His thirst for knowledge to get better at the sport is what really drives him.”

Speaking of film, Gallagher says he has watched everything single match available of Iowa coaches Tom and Terry Brands and Navy coach Cary Kolat. He loves their relentless, in-your-face style.

Just don’t ask Gallagher about John Smith or Cael Sanderson. They are too slick and too technical for his taste.

“I like to watch guys I wrestle like,” Gallagher said. “I don’t like watching someone that’s not like me. I’m kind of a wrestling junkie. I’m always watching technique videos and watching old matches.”

Gallagher grew up Irish dancing, but — like Smith and Sanderson videos — he wants to steer clear of that, too. It’s not that he won’t talk about it. It’s just that he would prefer to converse about more important matters like, say, wrestling. Or, if the topic isn’t wrestling, he wants to talk about something that will improve his wrestling, like weight lifting.

“My sisters were all really good at (Irish dancing) and I was forced to do it and I sucked,” Gallagher said. “I was wrestling and Irish dancing at the same time. When I got to second or third grade my dad told me I had to choose, wrestling or dancing.”

He says there were foot speed drills in Irish dancing so it may have helped his wrestling a little, but he can’t be sure.

None of this came easy for Gallagher. He started wrestling at the age of 4 when his father, Tom, a former wrestler at John Carroll University, took him to a club near their home. Paddy took his lumps early and didn’t turn a corner until fifth grade. He has taken wrestling to a higher level in high school.

That’s good news for Ohio State. They landed the best 160-pounder in the country, which means Buckeye coach Tom Ryan kept his promise to keep the best in-state kids at home. Gallagher likes what Ryan and his staff can provide, including an otherworldly wrestling room with five full mats.

“The facility there is pretty insane,” Gallagher said. “The coaches are really diverse. You have Tom Ryan, who’s an Iowa guy who teaches pace and getting in a guy’s face. Just hard-nosed wrestling.

“Then you have J Jaggers who’s really stealthy with his defense. Tervel (Dlagnev) knows the mental aspect of wrestling. He’s good at getting inside your head and calming you down. You have Logan Stieber in the room every day. He’s the best top wrestler ever. I thought I would develop as a wrestler more there than anywhere else — and it was two hours away.”

During his final high school season, Gallagher says he wants to improve in the top position. Getting more pins is the goal.

“I’m the best wrestler on my feet in high school or college,” Gallagher said. “It’s getting to that point where I’m getting good on my feet and if I can get comfortable turning guys on top, I’m going to be in the conversation for a national title right when I get in college.”

For now, Gallagher will have to settle for being the best high school wrestler in the country this season. Winning Cliff Keen Preseason Wrestler of the Year honors proves that he is the first person to enter the conversation.